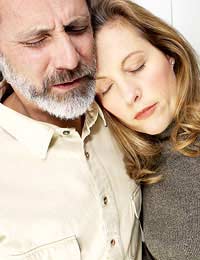 About 3,500 babies in the UK are stillborn each year. For women and their families it can be a very difficult time.

Babies described as stillborn die after 24 weeks of pregnancy, but before the birth. They either die in the womb (intra-uterine death) or during labour (intra-partum death), but will have shown no signs of life after delivery. The risk of stillbirth is higher in women aged over 35 years old, in women with pre-existing medical conditions and in those who smoke. Plus, being pregnant with multiples also increases the risk.

But in 70% of cases, the exact reason for having a stillbirth is unknown, even after a post-mortem has been carried out, which makes it even harder for families.

Coping After the Birth

After the birth, you’re likely to be distressed and grieving. You’ll be in emotional turmoil – numb, shocked, angry, sad, depressed or full of disbelief that it could have happened.

Your body will feel like it’s been through labour and your breasts will be producing milk, which is hard to cope with. It may be the last thing on your mind, but creating memories of your baby whilst you have time after the birth just helps some people. For example:

Having a funeral service or blessing can also help build up memories, and give you a chance to grieve for your lost baby, and many parents benefit from having a memorial where they can go to be with their baby.

The feelings of emotional turmoil continue on a longer term basis, as the effects of a stillbirth are the same as when a loved one dies. Not everyone may understand and may assume you’ll ‘get over it’ quickly, but it’s not something that can be recovered from quickly – if at all. As with any form of grief, the grieving process takes time and everyone differs in how they cope with it.

Whilst some people find it better to try and get on with normal life, for others it’s the last thing they can do. It can be difficult seeing other pregnant women or women with babies, as it brings back the reality of what you’ve lost out on.

Many people find talking about their baby and experiences can help. Sometimes friends and family find it difficult to know how or what to say to support you, so it’s worth considering seeing a counsellor or someone who knows all about stillbirth. Alternatively, joining a support group for families affected by stillbirth can be beneficial, as you’ll feel less out on a limb by being in touch with others who know what you’ve gone through.

The impact of stillbirth never leaves you, but over time it will hopefully become easier to accept. By being sure you’ve got access to support during the difficult times, and retain memories of your baby, you’ll gradually be able to cope with the situation over the longer term.