Home > After The Birth > Dealing with Miscarriage and Still Birth 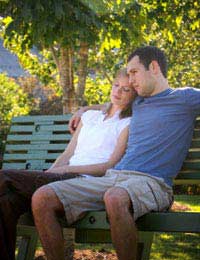 Miscarriage and stillbirth are both types of pregnancy loss that occur before birth. A miscarriage is defined as occurring before the 24 week mark which means that the baby would likely be unable to survive outside of its mother’s uterus. If a baby dies in a mother’s uterus on or after the 24 week mark it is considered a stillbirth. Both events can be devastating for prospective parents, so understanding how to deal with miscarriage and stillbirth is vital.

Miscarriage is a fairly common occurrence in the UK with estimates ranging between one in every four and one in every eight pregnancies ending in miscarriage. The signs of a miscarriage often mimic those of a menstrual period, including bleeding, cramps and backaches. These may be accompanied by a complete loss of other pregnancy symptoms such as nausea and vomiting, soreness or enlargement of the breasts, fatigue, food cravings and more. On the other hand, some women may experience no symptoms whatsoever and be informed by their doctors that they have miscarried. During a miscarriage often all tissues related to pregnancy will be expelled from the body and nothing more is done, but sometimes if tissue remains then a uterine evacuation (scraping of the lining of the uterus) will take place.

Incidences of stillbirth in the UK are much less common than those of miscarriage. The Confidential Enquiry into Maternal and Child Health (CEMAH) estimates that one in every 200 pregnancies will end in stillbirth. The term “stillbirth” encompasses both babies who die in the womb and during labour, either on or after the 24th week of the mother’s pregnancy. There are comparatively few signs of a stillbirth and often the mother will only notice that there has been little foetal movement in the past 24 hours. An ultrasound scan will then confirm if the baby is alive. If a stillbirth has occurred, most of the time labour will be induced and the mother will deliver the stillborn baby.

Dealing with Miscarriage and Stillbirth

Each parent will need to deal with miscarriage and stillbirth is his/her own way. Well meaning family and friends may attempt to cheer up parents who have just suffered a miscarriage or stillbirth, but the parents themselves may feel that this is inappropriate.

If you have experienced a miscarriage or stillbirth, let yourself grieve. Accept support when it is offered and consider finding a support group in your area in which you will be free to discuss your emotions. Follow your doctors’ advice to keep up your own health, and discuss with your partner whether or not you would like to try for another pregnancy.

For stillborn babies, law requires that their bodies be cremated or buried and often their funerals help parents achieve a measure of closure. Bereavement counselling has also been known to help parents dealing with miscarriage or stillbirth.

Each parent should feel free to grieve for their lost child in whichever ways feel the most comfortable and seek support or counselling as needed. There is no “right” way to deal with a miscarriage or stillbirth, so everyone should blaze their own trails and consider sharing whatever methods have helped them with others going through similar circumstances.