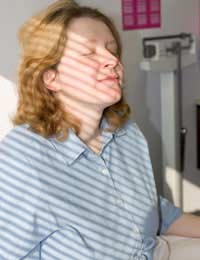 As part of the antenatal tests you’ll have during pregnancy you’re likely to be offered the chance to have chorionic villus sampling and a nuchal translucency test. Here’s the lowdown on these two tests, why they’re carried out and what’s involved.

Between about 10 and 13 weeks of pregnancy, you’ll be offered the chorionic villus sampling (CVS) test. This is a form of diagnostic test which can tell you whether your baby has a genetic condition such as Down’s syndrome (but not congenital conditions, such as spina bifida). All sorts of foetal disorders can be identified by CVS, including:It’s useful for all women to have it carried out, but is especially beneficial for anyone who has a family history of inherited conditions or those who are over the age of 35. It’s an alternative to the amniocentesis test and has the added advantage that it can be carried out much earlier, from about 10 weeks of pregnancy.

The fact that it can be carried out so early on in pregnancy can be beneficial. For example, if a serious genetic disorder is identified at an early stage, it gives parents time to come to terms with it and start making advance preparations. If there’s no treatment or cure for the condition, and the child will be living with severe disability, it also gives the parents chance to consider termination.

The test itself is relatively straightforward. A small sample of chorionic villi – the placenta tissue – is taken by putting a thin needle through the wall of the abdomen or by passing a small tube through the vagina and the neck of the cervix. Ultrasound scans are used throughout to help the doctor position the needle or tube in the correct place for collecting the tissue. Once the sample is taken, it’s sent away to a laboratory for testing and you should receive the results in about 14 to 21 days.

There is a tiny miscarriage risk associated with the test, but it’s only 0.5% - 2%. The miscarriage rate varies between hospitals and if you’re worried, you can always ask in advance what the rate is at your hospital (and you can go elsewhere if you wish).

The nuchal translucency test is one of the most recent antenatal tests and is one of the most accurate screening tests for Down’s syndrome. Not all hospitals offer this, and only about seven per cent of women are offered it on the NHS, but it is possible to have it done privately if you wish (fees range from approximately £80 - £150). Women over the age of 35 are more prone to having a baby with Down’s syndrome, so it can be especially useful for them and they’re usually offered it routinely.

The test usually takes place between 11 and 13 weeks of pregnancy. It uses state of the art ultrasound scans to measure the amount of fluid between two layers of skin behind your baby’s neck. This is because babies with Down’s syndrome have more fluid in this area than other infants. The measurement is input into a computer, along with other details, such as your age, your baby’s heart rate and blood test results.

The results should be available immediately. As it’s a screening test, you’ll be given a result in the form of a risk factor for having a baby with Down’s syndrome. Depending on the result and the level of risk – for example one in 200 or one in 600 – it’s up to you to decide whether you want to go on and have an amniocentesis test, which is diagnostic and will give you a more precise answer.