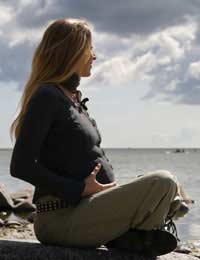 No-one wants anything to go wrong during pregnancy and it’s easy to worry if you experience unexpected symptoms. Whilst some instances of bleeding for example, are harmless, at other times they can signify serious problems. If you’re concerned about bleeding or miscarriage, or want to know more about ectopic pregnancy, here’s what you need to know.

Suddenly noticing that you’re bleeding can be a huge shock, but it’s actually quite common and one in 10 women experience it. There are various causes of bleeding – some more serious than others – but you should always consult your doctor or midwife and tell them of your symptoms as soon as they occur, if only to put your mind at rest.

During the first few weeks of pregnancy, often about the time a period would normally have occurred, many women experience very light bleeding or spotting. This is caused by hormone levels, which haven’t got high enough to stop the usual bleeding, but it isn’t a major cause of concern. You don’t need treatment for it, but you may find it beneficial to get some rest.

Having a polyp in your cervix can also cause bleeding in pregnancy but doesn’t require treatment. Sometimes bleeding can be due to a vaginal infection, which will need treatment, and at other times it may be caused by having sex.

Don’t delay calling a doctor if:

In the first 12 weeks, one in five pregnancies sadly ends in miscarriage and in many cases, there’s no way of preventing a miscarriage from happening.

The most common signs and symptoms of a miscarriage are vaginal bleeding (from light to heavy bleeding), blood clots and brown discharge. It’s often accompanied by cramp-like back or pelvis pain. In some cases, there are no obvious signs or symptoms at all and you may not know that you’ve miscarried until it’s picked up in a routine scan.

Miscarriage can be caused by a range of factors, such as:

A miscarriage can be devastating and take its toll on you, both physically and emotionally. Immediately after, you should take it easy and rest for a few days. Physically, you should recover quite quickly, but getting over it emotionally can take much longer and many women find they need time to mourn the loss of their pregnancy.

If you have three or more miscarriages in a row, it’s known as recurrent spontaneous miscarriage. You should be referred to a gynaecologist so investigations can be done. But the good news is that if the investigations are negative and don’t throw up any particular reasons for it, you still have a 70% chance of having a successful pregnancy.

With an ectopic pregnancy, the fertilised egg is outside the uterus or womb, and is usually found instead in the fallopian tubes (in rare cases, it can attach itself to one of the ovaries or elsewhere in the pelvis). Because the egg isn’t in the womb, the large majority of ectopic pregnancies won’t survive and the embryo doesn’t develop.

When you first have an ectopic pregnancy, it develops like a normal pregnancy. You may have the usual symptoms, such as tender breasts and feelings of nausea, and pregnancy tests may come back as positive. Some women don’t have any symptoms at all and are completely unaware. The first signs of an ectopic may be bleeding from the vagina – blood which varies from a slight discharge, to a normal period, to dark brown blood – lower abdominal pain and feeling faint.

If you experience a constant throbbing pain in one side of your abdomen, or sudden bouts of bad pain, then it’s essential to see a doctor. Sometimes the fallopian tube can burst and cause internal bleeding, which can be life-threatening if not treated.

In some instances an ectopic pregnancy may miscarry of its own accord, but in most cases treatment is required. A laparoscopy may be needed to confirm that’s what it is, then either surgery or an injection of methotrexate (maxtrex) are used – or sometimes both – to deal with it.

Ectopic pregnancy can be unpleasant, but it doesn’t mean you won’t be able to become pregnant after. In fact, 50 per cent of women go on to have a successful pregnancy.