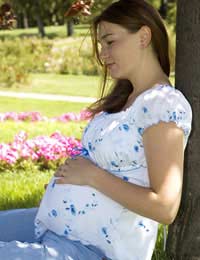 For many women, pregnancy is a rollercoaster experience. There are so many changes happening to your body – and soon to your life – and there are elements that are both good and bad. But whilst some women find themselves easing into pregnancy feeling happy, for others it’s not such a good experience and they find themselves descending into depression.

What is Antenatal Depression?

Antenatal depression is much more than pregnancy blues or just feeling down. It’s normal for women to have mood swings when they’re pregnant, but antenatal depression is much more than this. Like other forms of depression, it’s characterised by constant sadness, and inability to enjoy anything, feeling tired all the time, anxiety, irritability, problems sleeping (either not sleeping at all or sleeping much more than normal) and an inability to concentrate. Some people may also have changes with their appetite, either losing their appetite or wanting to eat too much, and may experience agoraphobia or obsessive compulsive tendencies.

There was a time when antenatal depression wasn’t recognised at all, but thankfully recognition is improving now. In fact, a study conducted by researchers from Bristol University in 2001 found that 10% of women experience antenatal depression to some degree whilst they’re pregnant.

The exact causes of antenatal depression are unclear, although there are likely to be a number of factors at play. The changing array of pregnancy hormones can be involved, but it also seems to be more likely to occur if you have a history of depression in your family or if you’ve experienced depression on another occasion. It’s also influenced by having bad experiences during pregnancy, such as having acute morning sickness or severe back pain, as this can affect you emotionally.

Experiencing stress during pregnancy, for example from other events going on in your life at the same time, may also play a part. So can a previous encounter with infertility or miscarriage, as if you’ve had difficulty conceiving or have lost a baby before, it’s easy to become extra worried and anxious that everything will be alright this time around.

If this sounds like you, or someone you know, then it’s important to see a doctor, midwife or health visitor and discuss the symptoms with them. Don’t be afraid to tell them how you feel – depression isn’t something to be embarrassed about – and try and share your thoughts with your partner, family or friends too, as a good support network helps. Many women benefit from receiving counselling or from trying cognitive behaviour therapy (CBT), but there are some antidepressants that are suitable for pregnant women to take.

Antenatal depression is a valid illness and can be hard to cope with, especially when you’re also coping with all the changes going on in the course of your pregnancy. Don’t suffer alone or try and muddle through on your own; get the help and support you need, and things should slowly improve.

One positive point to bear in mind is that having antenatal depression doesn’t automatically mean you’ll have postnatal depression too. The Bristol study results revealed no clear association between the two sorts of depression.

Rhesus Factor Issues
Share Your Story, Join the Discussion or Seek Advice..
I could go on for ages about ANTENATAL DEPRESSION having experienced being with my first (belated ) wife God Bless her. I was serving in the armed forces at the time and we were in married quarters in the 60's. My wife was in such a state because I had to follow my duties as a serving soldier,although the army was just brilliant about our problem. I was called home after arriving in camp by my wife because she could not cope and in those days ANTENATAL DEPRESSION was not recognised at all. This happened many many times and obviously I was in the army and serving in a very strict regiment at that time. In a way I felt sort of a fraud as I would be doing my duties then the phone would ring and I was taken straight home by the duty driver. I suppose I was on semi-compassionate leave for nearly the whole 9 months. On reading this article, medical thinking has come a long way from those days I guess. My wife was sent to see a psychologist in Haversfordwest and paid for by the army. The guy asked alsorts of questions but we didn't get much joy as he did not tell us any more than we already knew at that time. The main issue of this guys thinking was that the wife was away from home for the first time,different environment etc etc which was quite correct,after this we did not seem to learn anything else. I hate to mention this but my dear wife turned suicidal and I caught her in the middle of the night with the gas turned on full in the kitchen..I just managed to save her life before it was too late. We had a happy ending thank God as she produced a 10lb-2oz bouncing baby boy but she had problems with many stitches as he had to be forcep delivered. Nearly 4 years later she produced a baby girl not quite as big but she sailed through that pregnancy with flying colours. So what I am saying is that ANTENATAL DEPRESSION is after all recognised now and so it should be and should never be laughed at by anyone as it can be very serious. My advice to what they now call (pregnant fathers) please don't try to push this under the carpet it is a very dangerous way to attack this very strange illness.
PREW. - 8-Apr-11 @ 10:32 PM
Title:
(never shown)
Firstname:
(never shown)
Surname:
(never shown)
Email:
(never shown)
Nickname:
(shown)
Comment:
Validate: