How Do Premature Babies Fare in the Long Term? 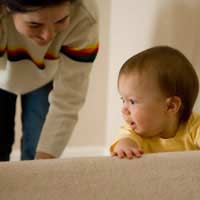 It’s not uncommon for premature babies to experience health problems, due to being born too soon. But their early arrival doesn’t necessarily mean that they’ll have long-term health or developmental problems. We take a look at how premature babies typically fare in the long term and what the research into premature births tells us.

When a baby is born prematurely, it doesn’t automatically mean that they’ll experience problems in the long-term, such as being slower to develop or grow. All premature babies are different, but those that are born extremely early may be more likely to face challenges in the future.

Are Premature Babies Slower to Develop?

If your baby is born at 26 weeks or before, then they are likely to be shorter in height and lighter in weight than their peers when they reach the age of two and half years old. But even though babies who are born prematurely may be smaller than their contemporaries at first, they’ve got a good chance of catching up as they all grow up.

You may find that your premature baby doesn’t reach developmental milestones at the same time as you’d normally expect, but then you do have to remember that they were born earlier. Rather than using their actual birth date as a guideline, when you’re thinking in terms of developmental stages, like learning to crawl, walk or talk, it’s better to view it in terms of when your baby was actually due.

During the first two years, you may well be more aware of how your baby differs from others of a same age, but after this, they’ve got a very good chance of catching up with their peers and not experiencing any major long-term disadvantages.

If you’re concerned about any potential health or developmental problems, then the best bet is to speak to a medical practitioner, or a teacher. Both groups should be happy to help monitor your child and identify any potential problems.

Studies into the Long-term Effects for Premature Babies

The charity Bliss has studied the impact that premature birth has on very premature babies – those who are born at 26 weeks or less – as part of a study called EPICure. They followed up the development of the babies and the results should provide valuable information into the lives of premature children.

IQ tests were carried out and found that being born very early can affect a child’s ability to process information. It can also affect attention and hand-eye coordination.

Caring for a Premature Baby at Home

What Happens If My Baby is Born Prematurely?

What to Pack Taking the Baby to Nursery
Share Your Story, Join the Discussion or Seek Advice..
[Add a Comment]
@marsabit. Sorry we took that line out as we couldn't make out what 'beard' was meant to be! Hope our answer helps regardless of that bit :-)
BabyAndPregnancy - 23-Feb-15 @ 12:40 PM
@Marsabit. If you are committed to the idea of breastfeeding and already have plenty of milk stored then make this clear when you see the consultant. Ask for advice on how to get your baby to take the milk from a bottle etc.even if he fails to latch on to you. The consultant may also be able to give you advice on anything that might help to supplement the breast milk rather than replace it. How helpful has your health visitor been? In our experience they are usually very supportive and will have been through the same thing with other mums so might have some great advice. You could also try some of the many great breastfeeding support groups around. Here are some places to get started: La Leche
National Breastfeeding Helpline
Association of Breastfeeding Mothers

BabyAndPregnancy - 23-Feb-15 @ 12:38 PM
In my exhausted state I have to laugh out loud at my phone corrections to my dictation! Beard of course is bottle and I am sure there are plenty of other typos!!!!!
Marsabit - 20-Feb-15 @ 11:42 AM
I have been trying to breastfeed my premature boy for just over three months now. I have said and expressed and topped up for over three months. This has been three hourly I am absolutely exhausted but absolutely passionate I desperately want to carry on feeding him. Had an diagnosed tongue-tied which was sorted three weeks ago and his latch became much better. Just doesn't seem bothered by food sometimes he wants to feed off me but only for eight minutes and then I have to try and give a top up bottle sometimes he takes the bottle sometimes he doesn't. Sometimes he fusses at the beard and they end up having to just give the bottle. I feel utterly heartbroken at this journey and don't want to stop. He was born at 34 weeks. I have tried everything from SNS to bottle to syringes. He had a bad reflux and I went on Gaviscon for a short time.I took him off this as it made him poorly with constipation. His growth is slow but steady below the percentile line. You can imagine the hard time I have been getting about my continuation on breastmilk. I have so much milk though and my freezer is full of it how can I not give it to him! It is full of my antibodies why oh why does the health profession have such divided views? I have just spoken with the lactation consultant and she said that some prem babies The hunger switch just hasn't switched on or developed. He Never ever cries for food. Mentallyhe is ahead of his weeks that he is laughing and smiling now he has a very happy happy baby. I have to see a consultant on Monday and I am dreading the word formula. I am feeling heartbroken please can someone give me some encouragement on their own journey similar to mine. I sit here in expressing 150 mils of milk for my little boy. I am full of milk for him and yet he is unable to have enough of it.
Marsabit - 20-Feb-15 @ 11:39 AM
Title:
(never shown)
Firstname:
(never shown)
Surname:
(never shown)
Email:
(never shown)
Nickname:
(shown)
Comment:
Validate: