Home > Pregnancy Lifestyle > Is it Safe to Have a Tattoo Whilst Pregnant? 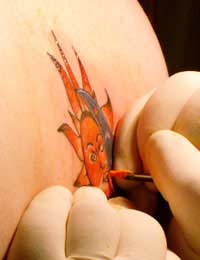 Many people love body art and find having a tattoo a distinctive and personalised way of expressing themselves. But is it safe to consider having a tattoo done whilst you’re pregnant? We take a look at the evidence.

Being pregnant can affect your lifestyle habits and choices in several ways and there are some things that are best avoided whilst you’re carrying a baby. Although having a tattoo is generally safe normally - as long as you choose to have it designed and carried out by a professional tattoo artist who uses sterilised equipment - if it’s something you’re thinking of having done whilst you’re pregnant, there are various issues worth taking into consideration before you make your decision.

Whilst professional tattoo artists pride themselves on running their business with care and diligence, there are still occasional incidences where some tattooists may not be quite so professional. When it comes to the equipment used, if it isn’t properly sterilised, then there is a risk that blood-borne infections can be transmitted during the process. These include infections such as hepatitis B, hepatitis C and even HIV. They’re not pleasant to catch at any time, but could be particularly harmful during pregnancy.

The normal state of your immune system may also be weakened whilst you’re pregnant, which can increase the risk of other infections arising as a result of having a tattoo done. What’s more, if a tattoo isn’t cared for properly after it’s been done, post-tattoo infections can occur, putting your body and immune system under extra stress.

Some people also suggest that, if a tattoo is added to your lower back during pregnancy, this may limit your pain relief choices during labour. An epidural, for example, is administered near the spinal cord and, if a new tattoo is in the same area, it may be considered unsafe to also give an epidural (old or existing tattoos in this area will not affect whether or not you can have an epidural).

At the best of times, having a tattoo isn’t for the faint-hearted, as the tattoo is created using needles. Even if you’re fully psyched up to having a tattoo, it’s not always easy to imagine quite what the pain is like if you’ve never had one before. It’s not unusual for people to feel faint or unwell when a tattoo is being done, sometimes even passing out completely. When you’re pregnant, your skin can become even more sensitive than usual, which could result in you experiencing more pain during the tattooing process. Putting your baby under this kind of added stress when you’re pregnant isn’t ideal, especially if you do end up fainting.

A tattoo is created on the skin using inks and some of the ink may be absorbed into the body. It’s unclear whether or not the absorbed ink could have an effect on an unborn baby, but it may be a risk that you’d prefer not to take.

Other Tattoo Issues When Pregnant

It’s also worth bearing in mind that the skin across your body naturally stretches whilst you’re pregnant, due to the extra pregnancy weight you’re carrying. It’s possible that, should you have a tattoo done whilst you’re pregnant, the overall appearance of the tattoo could change over time, once you’ve lost your pregnancy weight. So you could end up with a slightly distorted looking piece of body art!

Should You Have a Tattoo During Pregnancy?

In some cases, whether or not to have a tattoo during pregnancy is a decision taken out of your hands by the fact that some tattoo artists won’t offer them to pregnant women (you may have to declare that you’re not pregnant to have the tattoo). But if you’re still debating the issue, then it’s useful to weigh up the pros and cons of having this done during your pregnancy and think about whether you feel safe and sure. Most importantly, are you prepared to risk the health and safety of your unborn baby?

If it’s something you’ve wanted to have for a long time, then realistically waiting a few months longer isn’t going to hurt. If it’s a new whim that’s only recently occurred, then waiting until your baby is born will help you decide if it’s definitely something you want to proceed with. You can use the time during your pregnancy to explore the designs and options available and plan ahead for what you’ll have done once the pregnancy is over.

If you already have an existing tattoo, then there’s of course no harm to your baby. However, as with the skin issues discussed earlier, you may notice that as stretchmarks appear on your body due to the changing shape of your body, the look and appearance of your tattoo may change. In theory, this should eventually revert back to normal when your pregnancy is over.

In the end, it’s up to you to do what you feel is safe for you and your unborn baby.