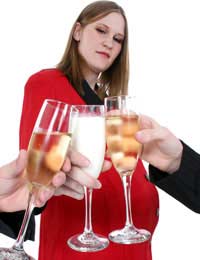 Knowing what you can and can't do during pregnancy is of crucial concern to pregnant women keen to do their best for their growing baby. In the case of alcohol, governmental advice has recently changed, so here's the lowdown on the health recommendations as they stand.

It's been well known for a while that a moderate to heavy alcohol consumption during pregnancy could cause serious harm to your baby, but it was believed that small quantities should be okay. However, that advice has now changed and as of May 2007 medical experts have revised their opinion and recommendations. The new advice now states that all pregnant women and anyone who's trying for a baby should avoid alcohol completely.

This replaces the previous advice that drinking one or two units per week is acceptable, as experts now believe that there's no safe amount of alcohol consumption for mums-to-be. This is because any amount of alcohol in a woman's bloodstream can pass through the placenta to the baby, regardless of whether you're drinking occasionally or every day. When this happens, the alcohol can interfere with the normal functioning of the foetus, affecting its ability to receive sufficient oxygen, and affecting the normal development in the body and brain.

Studies have shown that drinking 10-15 units of alcohol per week in the first 12 weeks of pregnancy increased the risk of a baby being born with abnormalities of the heart, kidneys and other vital organs. Also, drinking the same amount or more per week of alcohol in later pregnancy could reduce a baby's ability to grow and affect their IQ. Other health problems associated with a high exposure to alcohol in pregnancy include learning disabilities, hyperactivity, attention and memory problems and anger problems in the baby.

Although many women already chose to give up alcohol for the duration of their pregnancy and the previous advice to those that continued was to drink no more than one or two units per week, experts say some women still had a higher alcohol consumption, often without realising it. Some found it hard, for example, measuring out an exact unit at home, rather than having it out at a bar, so the new guidelines at least help remove the uncertainty of what's safe and what's not.

For those that enjoy a glass of wine in the evening, it's helpful to focus on the benefits for your baby as you endure nine months or more without alcohol. The time during pregnancy passes by quickly and there are plenty of other drinks that are allowable during this time. It may also offer a good chance to get experimenting with alcohol-free cocktails and, if you're craving the taste of wine, you can even purchase alcohol-free wine that tastes good, but won't harm your baby.