Caffeine and Alcohol in Pregnancy 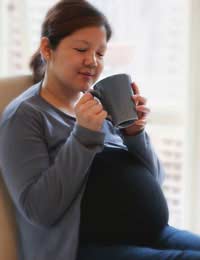 Whilst you're pregnant you need to be a bit careful with some of the things you consume. Two issues you should be aware of are caffeine and alcohol in pregnancy - here's why.

Caffeine is contained in a wide range of food and drink products and is something many of us take for granted. It's found in tea, coffee, chocolate, cola, energy drinks and even cold remedies and painkillers. Caffeine is a form of stimulant, which increases the heart rate and metabolism, and a diuretic, making you go to the toilet more. It can also be addictive and drinking too much can make people jittery, cause headaches and insomnia.

When you're pregnant or trying for a baby, experts recommend that you cut down on the amount of caffeine you consume. This is because studies have shown that having more than 300mg per day appears to be linked to an increased risk of having a miscarriage, a low birthweight baby or an infant with birth defects.

The Food Standards Agency recommends that if you're pregnant or trying to conceive you shouldn't have more than 300mg of caffeine each day. It's hard to know exactly how much this equates to, but as a rough guide:

You can use the above guide to work out how many different types of drinks, and what amount, you can have each day to meet the 300mg maximum caffeine amount. To find out the levels of caffeine in medicines and painkillers, it's best to check the packaging or consult a pharmacist for advice.

Many women choose to have little or no alcohol when they're pregnant, due to concerns for their baby. Although the exact situation is still unclear, experts do believe that moderate and heavy alcohol consumption could harm your baby.

Studies have shown that drinking 10-15 units of alcohol per week during the first 12 weeks of pregnancy increases the risk of your baby being born with abnormalities of the heart, kidneys and other key organs. Additionally, drinking this amount or more per week in later pregnancy could reduce your baby's growing ability and reduce IQ.

All these risks are increased if you smoke or have a poor diet, and also drink alcohol. Drinking heavily also increases the risk of having a miscarriage, having a baby with a low birth weight or brain damage.

Despite the problems with drinking moderate amounts of alcohol, it's possible that one or two units a week - particularly after you've gone past the 12 week stage - will be okay. During the very early stages of pregnancy, and even when trying to conceive, your baby is the most vulnerable. So it's best to limit alcohol during these times.

As a guideline, one unit of alcohol is equal to: