Home > Getting Pregnant > How Reliable Are Pregnancy Tests? 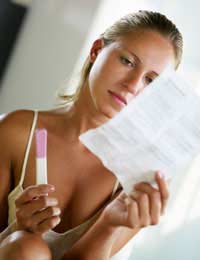 When you suspect you may be pregnant, one of the first things you’re likely to do is take a home pregnancy test. But how reliable are they and will a pregnancy test always give you a definitive answer?

There is a variety of different home pregnancy tests available – some costing considerably more than others – and they work by detecting levels of the hormone hCG (human chorionia gonadotropin) in your urine. This hormone is produced in your body when you are pregnant. In fact, it’s produced by the placenta not long after the embryo first becomes attached to the lining of your uterus. Levels of hCG are low at first, but quickly build up.

Pregnancy tests have different sensitivities to hCG – the amount your test can reveal will depend on whether or not it’s designed to be an early test, but it should give details on the box or packaging. The standard recommendation is that you can take a test from the first day of your missed period, but with some of the highly sensitive tests, it’s possible to take the test even earlier than that. Some of the modern techno tests even provide insight into how pregnant you may be.

In general, modern pregnancy tests are pretty reliable, giving about 97% accuracy. If the result of your home pregnancy tests says that you’re pregnant, then you probably are, as it’s unusual tests to produce false positives. You may, however, want to see a doctor to make doubly sure (or, as can be the case for many women, do another home test!).

Although false positives are rare, it is possible to get a false negative result – one where the test says you’re pregnant, but you later turn out not to be.

There are various reasons why home pregnancy tests can be unreliable. Sometimes it’s due to the test being done too soon, such as before the first day of your period should be, and the fact that it’s too far too early to pick up any levels of pregnancy hCG.

Some problems can also occur when the tests are not used exactly as instructed. This is easy to do, as some tests need to be dipped into urine for a set amount of time up to a certain point, whilst others are designed as midstream tests, or the ‘pee on a stick’ variety of pregnancy test.

If you try and use a test with the midstream method, when in fact it should be dipped, then the result may be inaccurate or not display correctly. Some tests are also designed to be used first thing in the morning, when your urine is more concentrated, so taking the test in the middle of the afternoon may not provide an accurate result. The result can also be unintentionally affected by drinking too much water before you take the test, which can have the effect of diluting your urine too much.

In addition, it’s also possible that certain types of medication you’re taking could affect the result of a pregnancy test.

It may sound obvious, but however anxious you are to get a pregnancy test done, always double-check and read through the instructions, as they do differ between tests.