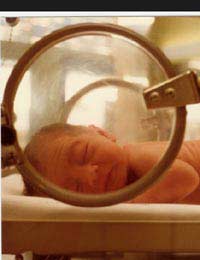 One in every 13 babies is born prematurely, or before a woman reaches the 37 week stage of pregnancy. Having a baby arrive early can be a traumatic experience, not least so if the baby is unwell. We talked to one family who’ve been through the trauma of a premature birth and discover the reality of what it’s like.

For Adam and Sally it was their second baby who was born prematurely. Sally tells us their story.

My ankles and legs swelled really badly, plus my arms and hands, and I developed breathlessness too. I was admitted to hospital for a few days, where I had to have complete bed rest. When I was let out, I had to have very regular appointments with the midwife – several times a week – and be carefully monitored, as high blood pressure can be dangerous in pregnancy.

I didn’t feel too well again at 28 weeks, but was told not to worry, but at just over 29 weeks it got worse and I was hospitalised again. They found high levels of protein in my urine and I was on a drip and monitored carefully. I was reassured that my baby was fine, but no-one had warned me that he could be born prematurely.

It came as somewhat of a shock to be told at 30 weeks that I needed to have an emergency caesarean section, as my blood pressure had got too high. It was all a bit of a blur, and not the birth situation I had wanted or expected, but Charlie was born safely weighing 3lb 5oz.

We saw him briefly immediately after the birth, but he was quickly whisked away to the Special Care Baby Unit (SCBU) and I continued to be treated for high blood pressure.

Adam was able to see him in the incubator, but it was another day before I was able to be wheeled in to see him myself. He was tiny and on a ventilator and it was very difficult not to be able to hold him or feed him, as you would a full-term, healthy new baby.

It was a very emotional time for both of us. I stayed in hospital for another week, but then had to go home without my beautiful new baby. Expressing milk was exhausting and hard and we spent many hours at the hospital every day; our life became divided between hospital and home. Friends and family rallied around to help look after our three year old daughter, Emily, but we felt guilty for having to leave her with others

Once he was being tube fed, Charlie slowly began to gain weight and it was a lovely moment for us to see our baby growing and beginning to look healthier. The Special Care Baby Unit were fantastic and we were very grateful for all the support they gave us during his time there.

Finally, after a month in hospital, baby Charlie was allowed to come home with us. It was such a relief to have our baby at home, although of course even more hard work began then and we were still exhausted for a while. Despite his early arrival, Charlie has come on in leaps and bounds. His physical growth has been slower than other babies, understandably, but otherwise he seems to be relatively healthy and unscathed by the experience.

Having a premature baby is scary and it’s vastly different to giving birth to a full-term infant. But anyone who goes through the experience can be reassured that the SCBU teams are fantastic and provide excellent support to families going through the ordeal of premature birth.”