Home > Case Studies > The Reality of Having Twins: Case Study 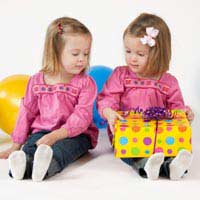 If you’ve ever looked at a parent with two cute little, identical babies and thought how perfect they looked, then think again. The reality of having two tiny, demanding babies to deal with is far from cute and cuddly, as one woman reveals.

Sarah Cook is from Manchester and is a 38-year-old mum of three-year-old twin girls and a six year old boy. She tells us what life is really like when you’ve got twins.

“My son was three years old when the twins were born. We’d only intended on having two children, so it was a bit of shock to find out at the 12 week pregnancy scan that I was pregnant with twins! By the time of my due date I was looking huge – felt like the size of a house – and could hardly move, so it was a relief to finally give birth.

Alice and Laura arrived safely and without any complications. I was in hospital with them for a few days and what turned out to be a much needed rest before the mayhem of being back at home with them. We were daunted by the fact that we’d be looking after two babies, but as we already had Max, we thought we at least new the basics.

But life with two demanding babies turned out to be harder work than we imagined. I seemed to spend my entire time feeding and the short breaks that I got in between were tied up with nappy changes. I tried feeding them together, with one on each breast, but it didn’t work out that well, and they both seemed to need feeding at different times. So no sooner had I fed and burped one baby, then the second was ready for her feed.

I was exhausted for months and months when they were tiny babies, as there was never a moment's peace. It’s also even more demanding on your body trying to breastfeed not one, but two, babies.

My husband, Andy, was great at helping out, especially with Max, but when he was out at work all day, I was mostly on my own. We involved Max as much as possible and he liked having a go at helping to bath the twins and later on to feed them, but I felt guilty at times that he wasn’t getting as much attention as he would have had we only had one baby, rather than two extras.

Our nights were quite disrupted for a while as you could guarantee that if one of the girls woke up and cried, then the other would follow. Now they’re a bit older, they’ve settled down into a better sleeping routine, thank goodness!

We’re keen to treat the girls as individuals, so don’t dress them in identical clothing. They are identical in looks, so at least with them wearing different clothes, we can all tell them apart! Life continues to be a constant juggling act and it’s strange going through all the developmental milestones of childhood with two children – they don’t always reach the same stage at the same time, either. Alice started crawling and walking earlier than Laura, yet Laura started teething before Alice.

It’s hard work, but we love all our children dearly and wouldn’t be without them.”