Home > Nutrition in Pregnancy > A Balanced Diet During Pregnancy

A Balanced Diet During Pregnancy 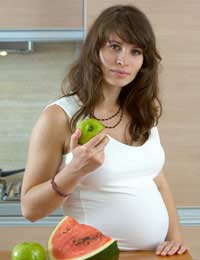 A healthy balanced diet is recommended throughout life and pregnancy is no exception. Not only are you eating to provide yourself with essential nutrients, but also your growing baby, too. But what types of foods should you be eating?

To get a healthy balanced diet, the general advice is that you should be eating:

Foods to Eat During Pregnancy

When you're pregnant, you need to ensure your growing baby gets a good supply of all the essential nutrients, vitamins and minerals. As part of a balanced and healthy diet, make sure you eat plenty of foods rich in iron, folic acid and calcium, as all are crucial for your unborn baby.

Iron is primarily found in red meat, pulses, bread, fortified cereals and green vegetables. It's good to have iron, as pregnant women can often become deficient in it and some women need iron supplements.

Folic Acid is found in fortified bread and cereals, brown rice and green vegetables. Having a good supply can reduce the risk of your baby developing neural tube defects, such as spina bifida. Although it's good to eat foods rich in folic acid, you should also take a daily dose of 400mcg of folic acid throughout pregnancy and when you're trying to conceive.

Calcium is mainly found in dairy products such as cheese, milk and yogurt and both full-fat and low-fat versions. As well as calcium, dairy foods also contain other vital nutrients, like vitamin D, vitamin B and zinc, which are needed for a healthy diet.

As well as advice on the best food to eat during pregnancy, there is also guidance on those things that you should avoid. To find out more, read our article Which Foods Are Not Safe in Pregnancy?.