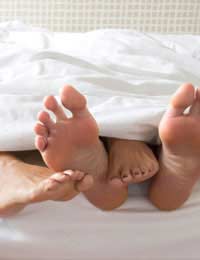 When you’ve recently given birth, it’s unlikely to be a top priority, but there often are a lot of questions and issues surrounding post pregnancy sex. We reveal the facts about having sex again after giving birth, when it's safe to do so and new issues that may arise as a result of having had a baby.

Having Sex After Giving Birth

Having a baby naturally, can have a major impact on your body and many women feel concerned about when it’s safe for them to have sex after giving birth. In the past, there used to be set guidance that you should wait six weeks after the birth before attempting sex again. The idea behind it is that it takes six weeks for the uterus to get back to its normal size again after a baby has been born by natural, vaginal birth.

But whilst some women are happy to wait this long, and not necessarily feel up to rushing back to sex until a while longer, others feel ready earlier. It’s now more accepted by the medical profession that every woman is different and it’s not really ideal to put a six week label on when you can have sex again.

If you’ve had a difficult birth, experienced tearing, had stitches, delivery by forceps or had a Caesarean section, then it will inevitably have an impact on the healing process. Then there’s the small point of the demands of looking after a tiny baby who constantly wants feeding and changing, and doesn’t sleep through the night, and it’s no wonder some women are far too exhausted to even think about sex at the six week stage!

For those that have had an easier birth and feel a desire for sex, then it may well be safe to do so after a minimum of two weeks post birth, but is best to always check with a doctor for reassurance. It’s something, for example, that you could bring up at your post-natal check-up. When you do start having sex again, don’t forget to use contraception if you don’t want another baby immediately.

The post pregnancy sex conundrum isn’t that simple though, as there are other factors to bring into the equation, not least the issue of how breastfeeding could affect you during sex. It’s not often talked about in polite company, but sexual activity and foreplay involving your breasts could well cause milk leakages. This can be a bit off-putting and kill the moment, but it does run in conjunction with breastfeeding.

For those who've not had children and are concerned that breast feeding will prevent them from becoming sexually aroused in that area, then don't worry because this isn't the case.

Your breasts might be a bit sore due to breastfeeding and, if you’ve got cracked nipples or any sores, then it’s best not to get them involved in sexual activities.

It’s by no means uncommon to not fancy having sex at all for a while after giving birth. Your body has been through incredible pressure, both during pregnancy and whilst delivering your baby, so it’s normal to feel exhausted. It’s also not unusual to feel anxious about the mere thought of getting pregnant anytime in the near future.

It can take a couple of months before a woman regains her libido and, even then, your sex life may be a bit different at first to how it was before. But sneaking off to have sex whilst your baby is sleeping, or being looked after by someone else, can add to the excitement.

If your libido seems to be lost for a lot longer, then it may be worthwhile chatting to your doctor.