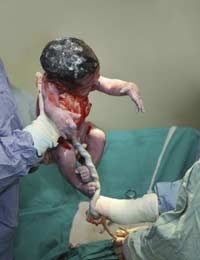 One in six women have a caesarean birth, either due to an emergency situation or because it's been pre-decided for various reasons. But what exactly is involved and how long will it take to recover?

If you're having an emergency caesarean, then things will happen very quickly, but with an elective one, the situation should be calmer. Either way, staff should keep you informed of what's going on.

If a caesarean is necessary, you'll have to sign a consent form first, giving permission to have it carried out. You'll be given an anaesthetic in the form of an epidural or spinal injection, so you can stay awake (although in some circumstances, a general anaesthetic may be required). A screen will be placed across your abdomen so you can't see what's going on and you'll be able to have someone by you, to hold your hand or talk to you. You'll also be wired up to a heart monitor, so they can keep an eye on your heartbeat.

An incision is made low down on your abdomen, above the pubic hairline, and the surgeons will then remove your baby. Whilst the baby is being helped out of the womb, you may have slightly strange sensations, but it's normal and isn't a sign that you anaesthetic hasn't worked. All in all, it doesn't take long and your baby should be born within 10 minutes of the operation starting.

Your baby will be checked to ensure they're okay, then you're able to hold them. Whilst you're holding your baby, the placenta and membranes will be delivered and then the surgeon will stitch you up. This part takes about 30 to 40 minutes.

After you've had a caesarean, it will take a bit of time to recover, especially if it was an emergency one and you weren't expecting to have had a caesarean. It's normal to feel tired and washed out for a few days and you may experience some pain and aching in your abdomen, as you've had an operation. Immediately after the op, you may well be on a drip, to ensure you're properly hydrated, you may have a catheter and a little tube to catch blood that pools under the scar. As far as stitches go, they'll either be dissolvable or need removing at a later stage.

You won't be up and about as soon as women who've had vaginal births and you'll need someone at home to look after you for at least a week after you leave the hospital. You'll need to get plenty of rest to ensure you make a full recovery - it will take at least six weeks for you to heal - and, at first, all you should concentrate on doing is feeding your baby.

If you've had a caesarean for a particular reason, such as a health issue, then you may need to have another for any subsequent pregnancies. However, many women do go on to successfully have a vaginal birth in the future.

As with any operation, there are risks involved with caesarean's (developing an infection is a key one), but hospitals are fully geared up to carrying them out and on average do 10-20 per week. If you want to find out more about caesarean sections in case it happens to you, have a chat to your midwife or doctor.